Many online casinos offer a variety of roulette games to players, and French Roulette is one of the most popular. This is because of the two rules that increase a player’s chance of winning on a straight-up bet. But, there are other reasons to play this game that we’ll get into.

In this guide, we’ll walk you through how to play French roulette, the types of bets, house edge, and payouts for the game. So, wherever the ball lands, you’ll know what it takes to get a winning number on French roulette wheels.

On the French table, like European roulette, there’s one zero and three columns for the inside bets. Meanwhile, the same outside wagers are present on the table, like red/zero, dozen bet, and many more. But, the wheel is usually in the center of the layout, though some only games put it off to the side.

Unlike American roulette, the roulette wheel numbers aren’t in consecutive order, and the pattern is actually random. Still, the red/black numbers alternate, with each pair of odd numbers followed by an even pair unless they’re near zero.

Lastly, all labels on the table will be in French, so be sure to study our glossary to make the right real money bets.

What makes French roulette low limit is the two rules that are unique to it. These raise the French roulette odds considerably in your favor. So, these shrink the house edge to 2.63% in most casino software-specific games.

In all French games, La Partage means “sharing” or “dividing,” so your even money bets are halved, and you get that half if the ball lands on zero. However, this rule will only ever apply to even-money wagers, so single number bets don’t payout on zero.

If you play roulette in Monaco specifically, your even-money bets will be “held” with a table marker for the next spin if the ball lands on zero. Then, if your bet wins, you get your original wager back, but nothing else because you didn’t win.

Betting on the roulette table is straightforward for roulette French because the lines resemble the American and European versions (just in French). When the house edge is added in, your payouts will change, so we’ve listed them here to simplify things:

When La Partage and En Prison are in effect, the house edge drops to 1.35%, so it might be worth taking those odds.

Types of Bets in French Roulette

When you play this variant of online roulette, there will be three main categories of bets: outside, inside, and call. 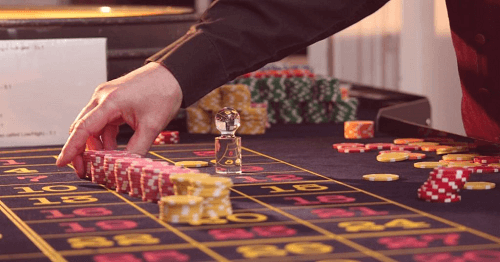 Difference between Call and Announced Bets

Whether you’re playing French roulette free online or the real money version, you’ll need to know the difference between call and announced bets. At some casinos, there’s a clear distinction on roulette tables, namely that call bets are essentially debt to the casino. Basically, you get different betting options.

Basically, you borrow money from the casino to place the bets, and your winnings get paid back. However, most brick-and-mortar American casinos won’t allow this, and some online games are the same.

So, that means that announced bets must be covered right away on the table. While the idea stays the same, there is a slight difference you need to keep in mind.

How to Play French Roulette Online

When you’re ready to play French roulette online, you’ll need to keep the paytables and rules in mind. While the aim of the game remains the same, the wheel will throw a spanner in the works.

So, follow these steps with that in mind to make money on the game: