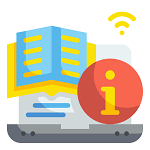 Terminology is a vital aspect of playing casino games, and Craps terms are no different. With such an old game, it’s no wonder that we’ve found nearly 100 common words used in games. Of course, there are many more we could go into, but these are the unique definitions.

So, check them out before you start enjoying one of the oldest dice games in the world. Or check out our favorite craps online casinos.

Betting on a 2 in the next roll of the dice.

Also called the casino house edge, whereby it takes a portion of the payout.

Placing a bet on a seven outcome.

In craps, this is a nickname for a craps player who gets lucky while shooting the dice.

When a player bets on “free odds” after the point number is set.

In craps terms, this means wagering with the short on the Come and Pass line bets.

When you bet against the shooter on the Don’t Pass and Don’t Come lines.

Betting even money that an eight will roll before a seven.

Contrastly, this is an even-money wager that predicts a six before seven.

When you bet on seven, it’s sometimes called a Big Red.

On the table, this craps term refers to the boxes for four, five, six, eight, and ten.

Also known as the floor supervisor who watches gameplay for cheating and guards the chips.

Betting on each hardway and seven.

When you pay the casino a 5% commission to play with corrected odds.

Betting on the Hardway to “bring out” the point number.

Any “loaded” or “crooked” dice used to cheat.

In the center of the table, you’ll place proposition bets between Hardway and all singe rolls.

When the rolls “don’t pass” the point number, the dice are considered cold.

In craps terms, this refers to a table where shooters are losing.

Also called the Pass bet, but it’s only used in some variants.

This is the section of the table where you put down your chips for the wager.

To start the game, a player (the shooter) will roll the dice and set the “point” or goal outcome for the table.

When the shooter is getting ready to throw.

Shooting a two, three, or twelve on the come-out roll.

Throwing craps on the come-out roll and automatically winning the Pass line bet.

Any casino employees that are managing the table, the two dealers, stickman, and boxman. 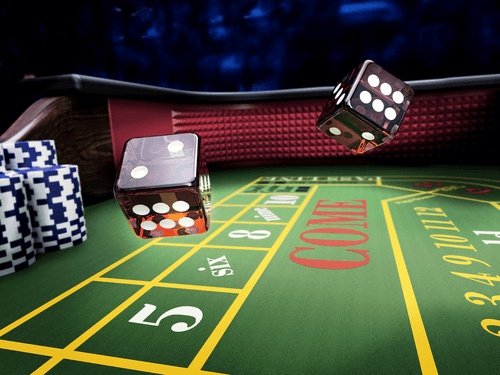 This is the casino employer, or software, who collects losses and pay out winnings.

Opposing the come bet, this goes against the shooter by wagering on a seven before the point.

Where the dealer will place your chips for the Don’t Come wager.

Another term for the section where Don’t Come bets are placed.

A bet on the first roll against the shooter.

A section on the table to place chips for the bet.

Free odds to double all wagers on initial rolls.

Any roll of a four, six, eight, or ten where each combination is different.

Another term for the casino’s increased odds over players.

A one to one payout on certain outcomes.

Referring to the section for Pass bets. 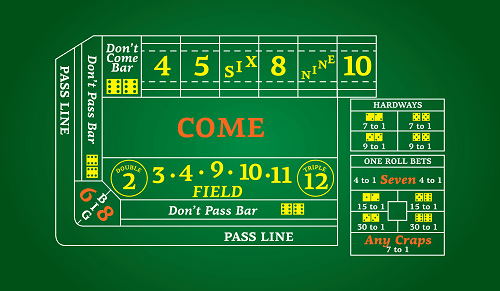 Any roll of double numbers like two and two.

Betting on four, six, eight, or ten before the shooter rolls the “easy way” and a seven.

In craps terms, a single-roll wager on a specific dice combination.

Dice that a shooter holds for a while before “sevening out”. Or, dice that “keep passing”.

Opposite to a Cold Table, when shooters frequently make the point.

Taking multiple bets to partially cover each other.

Betting that a seven will roll before the point with a 5% commission on losses.

Taking extra odds against the dice placed because of the odds.

In craps terms, this is the imprint on the table for sectioning bets.

Betting on the Pass or Don’t Pass.

When dice are weighted to roll certain outcomes for cheating.

A two-sided plastic disc used to mark the roll number on the table.

Rolling a seven or 11 on the come out roll.

Betting when the casino doesn’t have an edge.

On the next dice roll, some bets will be “safe.”

Wagers placed only on the upcoming roll of the dice.

Any seven combination roll after the come out bet. 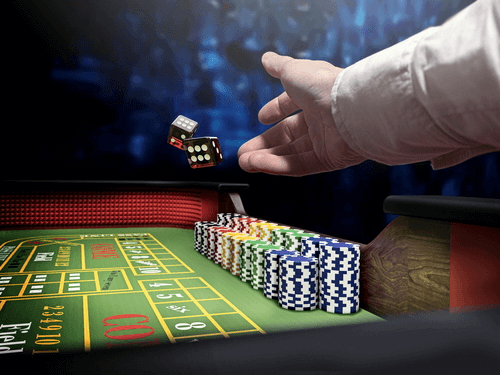 Taking winnings from a bet and adding them to another.

Also known as the Front Line, where Pass bets are placed.

Betting with the dice and the shooter.

Placing a bet that four, five, six, eight, nine, or ten will roll before a seven.

Referring to four, five, six, eight, nine, or ten on the table.

To double or parlay a wager.

Any special bets, like the Hardway at the center of the table.

Any player that bets on the shooter and/or dice to get the point.

Betting on more than one roll for the outcome.

When a shooter rolls a seven after establishing the point number but doesn’t repeat the point. Then, the dice pass to the next player at the table.

Any series of rolls before the shooter “sevens out.”

A name for the player who rolls the dice.

Rolling 1-1 is called this.

The casino employee who scoops up the dice and returns them to the shooter after a roll.

Making a free odds bet as a “right bettor” to give yourself an edge over the house.

In craps terms, a free odds bet at triple the original bet.

Odds that any number will come up on a roll.

Another craps term for the house edge.

The next roll will put certain bets at risk.

Any player who is betting against the shooter during the game.

Saying “yo-leven” instead of 11 to avoid confusion with seven.