How is two card poker played?

2-Card Poker is a fast-action table game found in many casinos. The name itself is a bit deceptive since both the game dealer and the player are dealt four cards, but there’s Four-Card Poker and Crazy 4 Poker already, so 2-Card it is. 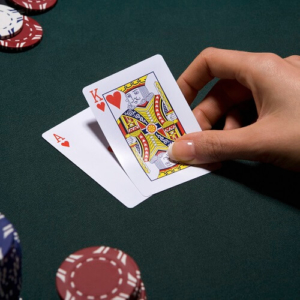 Playing the game is quite simple. 2-Card Poker is played with a standard deck of 52-cards. No wildcards or jokers are used. Players must make an ante wager before seeing any of the cards.

Once the wager is placed the game dealer will deal four cards to every player and themselves. Players play against the dealer to settle all ante and bet stakes.

Once the stakes are placed the players have the option of folding their four cards or to choose two cards to play and placing a wager equal to their original ante wager.

All winning ante and bet stakes pay even money. In addition, the game dealer must qualify with at least a Jack-High Flush in order to pay both the ante and bet, otherwise, the only payoff is on the ante bets.

Players may make a bonus wager on their top two cards and on a combination of the player and the dealer’s cards.

Bonus wagers are paid irrespective of whether the game dealer qualifies and regardless of whether the bettor wins their ante and bet wagers. In other words, should the casino game dealer fail to qualify, you can still win the ante, push the bet, win