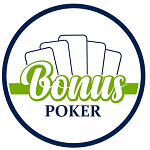 We will explore what bonus poker strategy works best. Additionally, we will go through the rules of bonus poker and how to play the game.

In bonus poker as with all other video poker games you are given 1 to 5 coins to play with is always advisable to take the maximum number of coins. This so that you can maximize your return in the event of a winning hand.

Jacks or Better rules are closely similar to Bonus poker rules. In fact both games have a rule that a pair of Jacks is the minimum paying hand. You’re expected to make your bets first that is to choose your coin size and select the number of coins first. Afterwards, the process is pretty much the same as any other video poker game you get five cards from the video poker machine. It’s up to you then to choose what cards to keep and which ones to discard. This is a very crucial part of the game since discarding the wrong cards could highly reduce your chances of winning.

Bonus poker pay tables are similar to Jackson better pay tables. The only difference is again, the four of a kind of bonus. We have listed the best paying hands in bonus poker from highest to lowest.