It doesn’t get much more star-studded than February 13 2022 Super Bowl Halftime Show line-up, in which Dr. Dre, saw Eminem, Kendrick Lamar, Mary J. Blige, Snoop Dogg. There was also a surprise performance by 50 Cent and Anderson at LA’s SoFi Stadium.

With a group of bona fide icons like that being involved in the performance, it seemed unlikely that this year’s Super Bowl show would be underwhelming and it didn’t disappoint.

Over 15 minutes, artists joined together to give a sentimental race through some of hip-hop and R&B’s most iconic songs – these were the biggest moments from the event.

They performed at SoFi Stadium in Inglewood, California during a face-off between the Los Angeles Rams and the Cincinnati Bengals. Jay-Z’s Roc Nation co-produced the halftime show telecast.

The Super Bowl Halftime Show was bookended by performances from Snoop and Dre, who first took to the stage to perform ‘The Next Episode’ and a version of 2Pac’s ‘California Love’.

The latter was most notable for another instance of the stars seemingly defying the NFL – reports had claimed the league had told Dre not to rap the line “still not loving the police”, yet he went ahead and did so anyway. 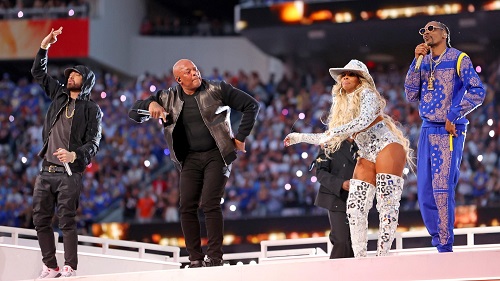 50 Cent dropped in for his surprise appearance

Early on in the halftime show, admirers got a big surprise when the camera panned down from the roof Dre and Snoop were performing from to show 50 Cent hung upside down a floor below.

The memorable entrance was a reference to his video for huge 2003 single ‘In Da Club’, which he launched into while still hung from the joists as dancers recreated a club scene beneath him.

It’s not surprising that Fiddy’s unconventional start to his section quickly becomes a meme, with the rapper being compared to everyone from Spider-Man to a vampire bat.

The only singer on the bill for this special Super Bowl performance, Mary J. Blige more than made the Super Bowl stage her own