Juicy Jewels is a slot game published by Rival Gaming. The game’s theme is seemingly inspired by games like Candy Crush and Bejeweled. However, they tried to put a new spin on it by making jewel-shaped candies. The candy theme is a bit of an overused concept in the world of casino gaming. Even so, every now-and-again, a game using old tropes is able to surprise with some exciting features and designs. Is Juicy Jewels one such game?

Well, we decided to have a look at this title which has been around for some years now to see whether it is actually worth playing. Below we have a look at how the game works, its visual fidelity, and bonus features. Then, we tell you whether it is a game that you should take a chance on. So, read on to find out. 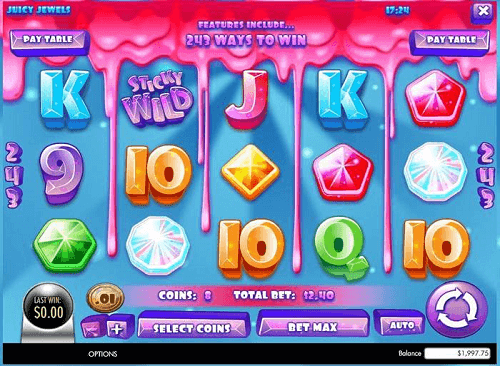 How to Play Juicy Jewels

Juicy Jewels is a 5×3 slot game that features the 243 ways to win payline structure. You cannot alter the number of paylines but you can alter your bet. You can set your bet per spin to be anything between $0.30 and $75.

The maximum jackpot in the game is $1250, which seems a bit small, especially with a payout percentage of 94.74%. The symbol you really need to look out for is the Gold Star. Landing it on all five reels left-to-right will earn you the jackpot payout.

The game has a clean design but the color palette is a bit limited for a game that tries to mix candy with jewels. The higher paying symbols are all candy jewels in colors such as red, green, purple, blue and orange. Lower paying symbols are the standard card symbols often seen in slot machine games (A, K, Q, J, 10 and 9).

Overall, it doesn’t hurt to look at the screen while paying Juicy Jewels but we do like it when games have a little bit of fun with their design. It just adds to the overall experience, which is missing here.

Some players may be a little disappointed with what Juicy Jewels has to offer in this area. There is only a single bonus present and that is the sticky wild feature that can trigger respins. How it works is that when you complete a winning combination with a wild, it will trigger a re-spin with the wild symbol stuck in place.

You will keep on being awarded respins as long as you keep landing wilds on the board, which will also continue to remain in place.

The bonus feature does give you an opportunity to win big prizes but we wish that the game offered just a little bit more than just this. 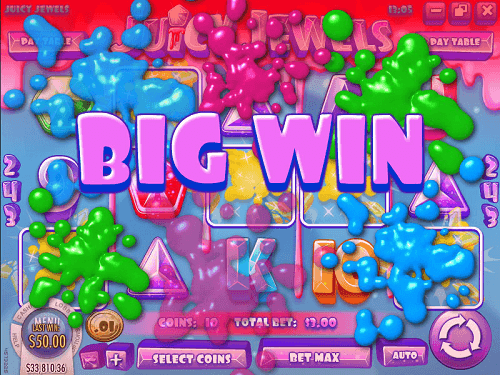 Juicy Jewels is not a terrible slot game. There is nothing wrong about the standard gaming experience it offers but there is nothing great about it either. And, therein lies the problem. You will have an okay time playing the game but it probably won’t be very memorable unless you win a cash prize, which in itself is pretty hard to do with a percentage of 94.74%.

It is for these reasons that we have decided to rate Rival’s Juicy Jewels slot game a fitting three out of five. There aren’t any surprises but there is nothing technically wrong with the game either.