How to Play 7 Card Stud for Dummies

7 Card Stud (also known as Seven Card Stud) is one of the most popular online poker variations played today. As with pretty much each form of poker, your aim the highest hand possible to beat your opponents’ hands. The player with the highest-ranked hand wins the pot.

In a regular game, all players will be given seven cards through the course of the game (which is why it is called 7 Card Stud). With these cards, you will need to build the strongest five-card hand possible, while discarding two cards.

Seven Card Stud is considered one of the more exciting and strategic poker games, which is why it is so popular with players in the United States. In fact, it is up there with Texas Hold’em in terms of tournament games. So, if you would like to find out more about this poker variation, make sure to stick around.

We’ve created the ultimate guide to the game for new players. In teaching you how to play, we go over the following topics:

We also walk you through a standard game so that you will know exactly what you are in for when you play online. So, what are you waiting for?

Before we get into the walkthrough of how this game works, perhaps it would be better to explain some of the game’s rules.

An average game of seven-card stud plays out as follows:

So, there really isn’t any variation with regards to accepted poker hands in 7 Card Stud. It uses all the standard hands. If you are unsure of what those are, here is a brief summary:

So, we have got a few tips that you should keep in mind while playing this poker variation. They are sure to help you win more games.

Pay Attention to All Hands

This should really go without saying, but you can make a lot of deductions regarding your hand by watching other players’ hands. For example, if you are dealt a pair of Aces at the beginning of the game, and two other players are also visibly dealt Aces, you already know you will never be able to get a four-of-a-kind. 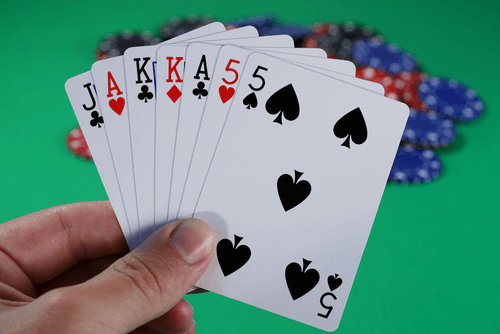 Adjust Your Strategy to the Number of Opponents

If you are playing poker against a single person, a low hand has a better chance of winning than it would in a game featuring more people. In games featuring a larger number of players, it is more likely that a person was able to build a better hand than a high card or pair.

So, in such cases, we don’t recommend sticking with such hands.

Playing every single hand is never a good idea. You should be able to tell whether or not a particular hand is worth going for from the beginning. Don’t go for stupid plays because often, this will just lead to you losing your bankroll quickly.

However, with this stated, also don’t be too strict on what hands you do play. If you are only going to play hands when you are dealt with a starting three-of-a-kind, you aren’t going to be playing any games.

Home » How to Play 7 Card Stud for Dummies