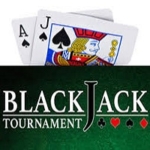 Blackjack tournaments are an exciting aspect of playing blackjack online. It offers players a gambling experience that’s different from playing regular blackjack. What makes it different from the standard game is that in tournaments, you compete against the other players, not just the dealer. And, you will have to beat both to win.

You’ll also notice that the dealer in the game doesn’t start dealing with the player on his left. Instead, whoever gets dealt with cards first changes from hand to hand. This helps keep the competition on a more equal footing. But, players who play last have an advantage because they will have seen how much the players before them have wagered and optimized on that.

Because it’s a tournament and not a game, there are rounds. The average game usually consists of about 6 players of which the top 2 or 3 will advance to the next round of the tournament. At the start of every round, each player holds the same amount of chips. The winners at the end of every round are determined by the number of chips they hold. Each round lasts for +- 30 minutes.

Online Blackjack Tournaments: How to Play

Playing blackjack in a tournament setting is not complicated at all. Follow our easy steps to play with ease.

You’ll need to approach an online blackjack tournament differently then you would a normal game. This involves using different strategies to optimize your chances of winning. And, more importantly, the strategies you decide to use must be effective in a tournament setting. It’s important to also keep in mind the goal of the game (to acquire the most chips) when you employ strategies.

One of the more classic blackjack tournament strategies involves doing the opposite of what the general group of players is doing. For example, if the majority of the table is making small bets that are geared towards the safe side, you would go ahead and make larger, more daring bets. This strategy could work in your favor because players who go for the conservative bets will get much less in return for their bets. If you go higher, you are more likely to end up with the most chips at the end of that round. But, remember that the risk of losing more than the rest of the players if things work against you is higher. In other words, you could either be in first or last place when you use this approach.

Another option is betting small and waiting for an opportunity to bet big. This works best if you are the last player to act because you’ve had a chance to see how all the other players are betting. When you find the perfect opportunity to bet bigger and take it, you’ll most likely find yourself in the lead. Once in the lead, players usually then revert to making more moderate-sized bets. This prevents their opponents from doing the opposite like in the first strategy we discussed.

In the end, the online blackjack tournament strategy comes down to a balancing act. You have to sometimes do the opposite and risk more, to come out on top, but only when the perfect opportunity presents itself.

In all the other types of tournaments, chips usually have no value, except in live money tournaments. Before the game, players purchase chips which can be exchanged for real money when the tournament is over.

In non-elimination tournaments, players don’t necessarily get eliminated, instead, there’s a leader board where players rank and you can see where you stand on the leadership board and how much you need to beat the top players. 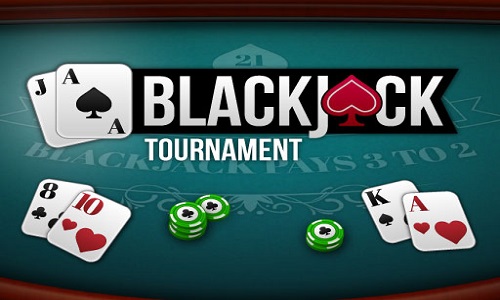 What is a Blackjack Tournament?

For those who are still a bit uncertain as to what exactly a tournament is, we’ll attempt to clarify. Blackjack tournaments are a series of games based on the original blackjack game. But, there are many differences between the two that you must understand. A basic blackjack game uses one table, whereas a tournament can use a single, or multiple tables. Each blackjack tournament can also have its own set of rules that differs from the rules in other tournaments. There are generally between 2 – 3 rounds in a game and winners from each round will progress to the next round. This goes on until an ultimate winner is determined.

Quick Facts About the Game

Here are some interesting facts about the game. You can read through each of them to brush up on your general knowledge of the game.